How does a Solar PPA work? 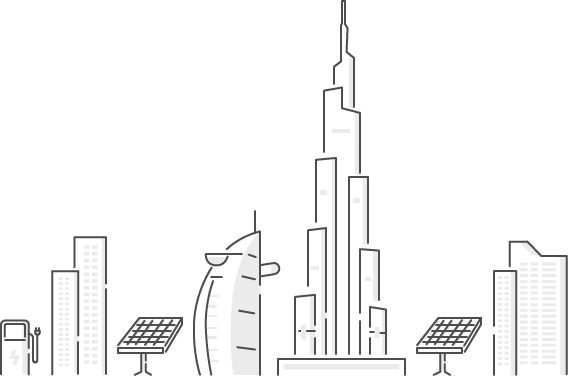 You sign a Power Purchase Agreement (PPA) with WATTZ.

WATTZ designs, installs & connects the solar system to the utility grid at little to no upfront cost to you.

You pay for the power you consume at a rate typically less than that charged by the utility company.

WATTZ continues to monitor & maintain the system while you save on your energy bill.

After 20 years, you can sign a new agreement or the system is removed at no costs.

You will need a Building Permit from Dubai Municipality for the civil or structural part of the installation, & a Completion Certificate after the Municipality has inspected & completed its final checks. For buildings located in Free Zones, the competent Authority (e.g. Trakhees) should provide these documents.

The bi-directional smart meter measuring the electricity exported to & imported from DEWA electricity grid will be installed by DEWA without any additional cost to customers over the normal service charges.

The second meter, installed to measure the electricity generated by the PV system, will be charged by DEWA as part of the one-off connection fees.

A second smart meter will be installed by DEWA to measure the electricity generated by your PV system.

A one-off connection fee will be charged by DEWA as part of the connection process. This will typically represent a small share of the overall project cost.

As per the Connection Conditions (Publications & Resources) the capacity installed cannot exceed the maximum load allowed at your premises.

Provided all authorizations required have been obtained, PV installations can be done quickly. A small 10 or 20 kW system can be installed within a week.

Any surplus of electricity will be offset from your bills in the following months. An indefinite rollover is applied, so any surplus will be carried forward to the next bill.

The electricity produced by the PV system reduces the amount of energy that a customer has drawn from the grid. If, at any point in time, more energy is produced than consumed, the excess is exported to the grid.

The monthly energy bill will only reflect the net amount of energy consumed as demonstrated in the diagram below: 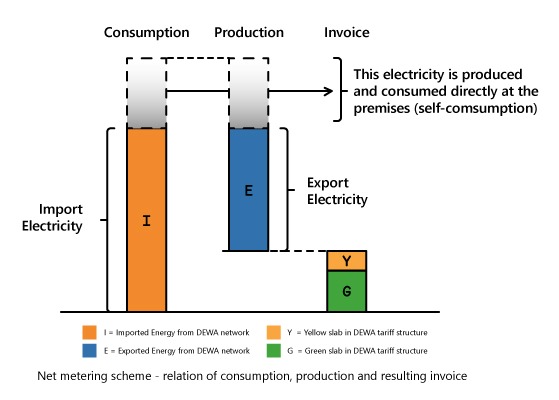 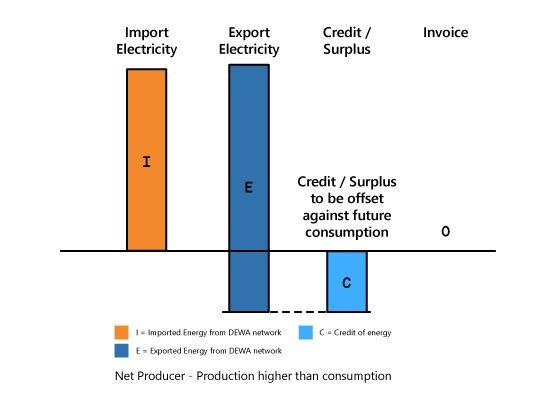 The following billing period, the credit will be offset against net consumption. 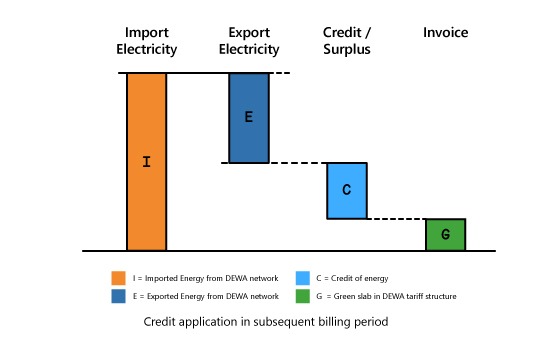 If during several consecutive months more energy is produced than imported from the grid, the credit accumulates & is carried over to the following months.