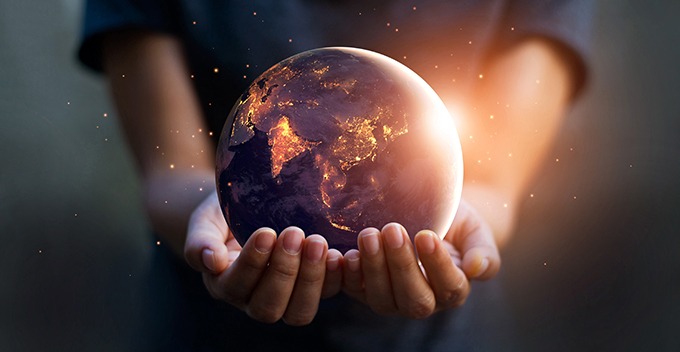 There are plenty of different reasons why going solar is so advantageous. Apart from financial benefits, the environmental impact of solar panels is very impressive. This is the main reason why many homeowners and utilities alike are choosing solar energy at a faster rate than ever before all over the world. By having a solar panel installation at your home or business— you will be surprised to know that a typical residential solar system can be expected to offset nearly 3-4 tons of carbon emissions each year. This huge offset is almost equivalent to planting 100 trees a year.

In this article, we would like to share the environmental benefits of solar energy to help you better understand the impact that renewable energy has on our planet.

We all know that the global population is ever increasing while fossil fuel is depleting. They are inversely proportional to each other. Our planet earth has only a finite amount of oil, coal, and natural gas to cater to the population. While the sun is the earth’s most abundant green energy source, producing a staggering 173,000 terawatts of solar energy every second. That is more than 10,000 times the world’s total combined energy use and is readily available every day. The sunshine used in solar energy production is free, and there’s lots of it. On the other hand, fossil fuels are running out of the cost of finding and extracting them. Those will be anyway too expensive for our strained population. Going solar is the best way to act against the reality of depleting resources.

Many natural gas plants, coal power plants, and crude oil refineries require huge plots of land to handle their massive production lines. These plots take up a large amount of space to maintain their traditional systems, processing sufficient quantities of fossil fuels to power the local population.
These hazardous plants also tend to pollute the surrounding area with dangerous gasses and toxic byproducts. That can invariably affect the local environment. On the other hand, solar panel installation requires less than 20% of the land when your panels installed on the land and rooftop installations take no extra space and therefore reduces wastage of land.

Solar energy is hailing as the Holy Grail for climate change mitigation. Solar photovoltaic (PV) electricity generation can greatly help reduce both air pollutants and greenhouse gas emissions. That is like no other green energy source. We all know that something as important as clean air is in limited supply, and becoming increasingly polluted each year. We constantly informed of the danger bells of ever-increasing air pollution and climate change. Regardless of the country we live in, the increasing air pollution and the effects that it is having on our overall climate are being felt. When fossil fuels being burned then the three of the major pollutants that end up in our air are Sulfur dioxide, nitrogen oxide, and carbon dioxide.
On the other hand, solar panels are the products of modern innovation-driven by concern for the environment. Solar panels are the best option for a clean, renewable energy source. They are an alternative way of generating clean and green energy without harming the atmosphere. Solar panels are the only best option when it comes to reducing your carbon footprint.

Cleaner environment makes our planet a better place to inhabit not only for us but also for the future generation. It’s that simple. So by having a solar panel installed on your home, you are not only contributing to reduced carbon emissions and fossil fuel burning. But also contributing to the improvement of public health. Some of the studies have revealed some interesting facts that the areas using significant amounts of solar power and other renewable energy sources have reported reduced cases of chronic bronchitis, respiratory and cardiovascular problems, resulting in fewer lost workdays, improved life expectancy, and reduced mortality rates.

We know that the conventional power plants draw on an average of 20 to 60 gallons of water for every kilowatt-hour of electricity produced. You observe zero water wastage with solar energy, which is a great advantage for homeowners in the UAE. Between manufacturing, installation, implementation, and removal, solar energy uses 86 to 89 percent less water when compared to coal-produced electricity. It is important for every one of us to preserve natural resources and pass them onto future generations.

Are you ready to go solar?

By investing in solar panels, you will reduce the negative impact you have on the ecosystem. You will live in a better place. And love those moments when you are surrounded by a clean and green environment. Wattz is leading residential solar panel installers in Dubai. Have a project in your mind? Speak to us, our experts are ready to help you!