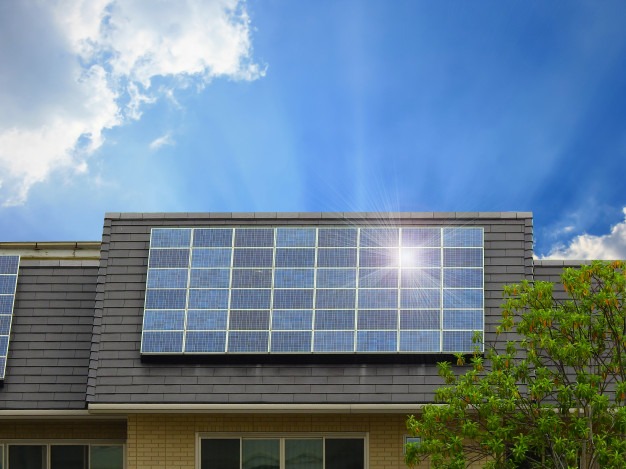 Solar energy is one of the most reliable forms of energy available for our homes and buildings. Thanks to the technological advancements in this industry that has led to the cost of going solar reduce every year. In recent years, many homeowners are considering the option of adding a solar energy system to their home roof to harness the sun’s energy. Roof-top solar panel systems fitted to the roof of the building is known as photovoltaic systems that act as a power station to generate electricity using the radiation emitted by the sun. The solar panel can fit any building from mid to large-scale residential and commercial complexes as well. But before you take the leap to fit in the solar panel system, read these facts to know some interesting facts about residential roof-top solar panels for homes.

Step 1: Sand: The main raw material used in making solar panels is pure silicon. It all starts with sand, the raw material from which silicon is extracted. The sand is subjected to a highly intensive process where high purity silicon is produced in an arc furnace at high temperatures.

Step 2: Ingots: Ingots come in between the transformation of silicon to solar-grade finished solar cells. These cylindrical-shaped, melted compounds made from silicon rocks. When these ingots sliced into thin disks, we get wafers.

Step 3: Wafers: The solar wafer is a highly pure, defect-free single crystalline material, and a thin slice of crystalline silicon (semiconductor) that works as a substrate for microeconomic devices. They used for fabricating integrated circuits in photovoltaics (PVs) to manufacture solar cells. This wafer is the main component in the power generation system of PV to convert sunlight energy directly into electrical energy.

There are three types of solar panels available for the Solar PV system are Monocrystalline, polycrystalline and thin-film solar

Based on these solar panel advantages, one must choose suitable solar panels and also must consider the reasons to choose solar energy for homes.

Currently, more than 90% of the current solar cell market is based on silicon. Silicon is one of the best conductors of heat because it has a spectrum-like structure to capture a large amount of radiation. The solar cells made of silicon atoms connected to form a crystal lattice, that provides an organized structure. That makes the conversion of light into electricity more efficient. This is the reason why silicon is the most used element in the circuit industry.

Solar panels do not emit any kind of harmful greenhouse gases during the process of energy production. They do not use any other component which is not readily available but only the sunlight.

Sunlight takes approximately 8 minutes to reach the surface of the earth and just a fraction to come in contact with solar panels. Hence, the Solar power system does not even make its customers wait to generate electricity.

Solar power in the UAE has the potential to provide most of the country’s electricity demand. While being a major oil-producing country, and one of the top carbon dioxide emitters the UAE has taken steps to introduce solar power on a large scale to generate the vast majority of its electrical energy by 2050 from renewable energy. The Dubai Clean Energy Strategy aims to provide 7% of Dubai’s energy from clean energy sources like solar energy by 2020 and increases this target to 25% by 2030 and 75% by 2050.

Sustainable energy sources such as solar energy are gaining popularity all over the world. Reduce your carbon footprint and nerve-racking electricity bills by getting solar panels for your home through the best installers.

As a leading solar energy provider in Dubai, Wattz provides you with the best quality residential solar power system. To get suitable home solar panels or installation services, reach us at info@wattz.ae or contact @ +97142594454